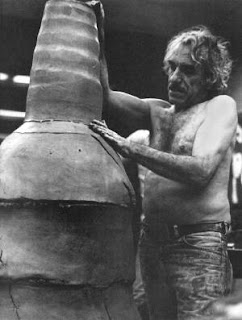 Pop-corn time!
If you ever wished you could be a fly on the wall for a Peter Voulkos workshop... here it is.
Voulkos is one of the more prominent peaks of American Ceramics during the past 50 years.
A whole bunch of us have pivoted on this particular peak. It's amazing when you sit down and watch the entire series. The resulting conversation is obviously much better handled in a bar.
This is vintage Voulkos posted by Ken Stevens... Here is a link to a full workshop! If you have the time, grab a bottle of gin, a pack of smokes, a six pack and kick back for a few hours of insight into American  Master.

Here is a bit of background and lead-up to this series originally posted by Ken on Clay Art in 2003.

"Hi All,
While attending the Kansas City Art Institute, I came across three large
video reels in the dumpster near the ceramics building. At the time, I was
dumpster diving for ceramic heads- the sophomore students had made clay portraits of themselves for a class assignment. I found a lot of great
heads that year to put in my yard. More importantly, however, I found these three reels.
At the time I thought they were movie reels, but soon with a
bit of research I found out that they were old reel-to-reel VTR (VCR type
tapes) from the 70s. The format and the giant machines for the reels were
out of date by some 20 years (I found the reels in 1995). The reels were
labeled =93Peter Voulkos 1976 demonstration=94 and together last about three hours long. They then sat in my basement for eight years, so now the reels are 27 years old. They may not have been seen for as long as 20 years now!

After the unfortunate death of Peter Volkous, I once again remembered the reels in my basement and decided for the sake of preserving this historic event I should try and find a way to restore them. I sent the reels to have them professionally saved to a DVD before they become unsalvageable.
To save these reels professionally it will cost me a large chunk of money,
but I think it will be worth it to see what Peter Voulkos was doing in his
heyday."

Ken... I seriously owe you a beer.
Posted by FetishGhost at 9:01 PM

i attended a reitz/voulkos workshop in 2002, the year before he passed. it was nothing like his old workshops but still inspiring all the same.

I love that he never took his smoke out either!
What a dude.
I always learn so much from your blog.
Thanks!
Bonnie
:)

How gloriously macho! That must automatically makes it great.
Guy's over-rated.

yeh saved it for later!!! cheers..

To be fair to Peter's legacy, his place in American Ceramics is unshakable. For all the bravado and machismo, he stood with his peers in counterpoint to the wave of Eastern influence that washed through the ceramics world.
His influence was magnificent. It takes a special person to stand and deliver... it takes an even more impressive personality to empower others to reach beyond accepted horizons.
PS... the machismo was way over the top eh? I don't think he acting.

what an amazing find, i wish i had and will look forward to a couple hours to watch. i was 18 in '76 and had never heard of him back then. the machismo is over the top by today's standards but if you didn't live back then, then it's impossible to put into context. it's like trying to explain jimi hendrix, free love, the drug culture or any of those other scary things to the younguns brought up with "this is your brain on drugs". i think "madmen" does an ok job of attempting to put all this in context but it's not really explainable or defend-able. all that aside, he made some nice work and was a force to be reckoned with. his career, with rudy autio, have to be considered within the context of their time also.

Amazing, thanks for posting this

Let us know when you get them on DVD. It would be worth it to buy a copy.

Way awesome! I finally sat down to watch the whole thing. I didn't mind the "machismo", I just thought he carried himself with a "no bullshit, it is what it is" twang. Wow, that was so cool to watch, a legend.

Hello,
Nice blog i like it
There have been so many good films to come out of Hollywood that the Hollywood memorabilia industry is big business.