Here's a absolutely golden opportunity to participate in the next generation of learning. This is the notion of the "community classroom" put into motion by non other than Diana Fayt.
This is a 6 week Clayer E-Course running February 27 - April 8, 2012.

The class started Monday morning, but the casual, no pressure style is already setting the tone. This is something everyone needs to see! This is an exciting new direction for studio education and Diana is setting the bar high.

I'm habitually drawn towards seeing the process and thought that pushes Art with a big "A". This nibbit is an insightful look at what kind of thinking propelled this pop icon into his well deserved place in the history books.

In between packing and moving truck loads of boxes to the new house, I've been getting in a bit of testing. I really enjoy firing with the UOP crew. I'm not pressed to fill an entire kiln, so I'm playing with the glazes that they have on hand.
It's kind of like cruise control... 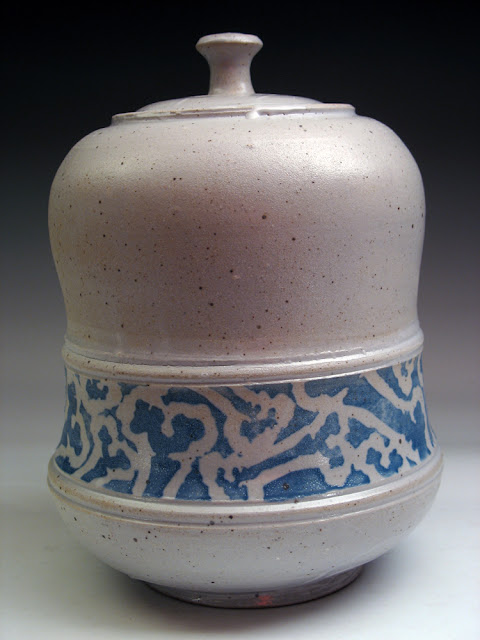 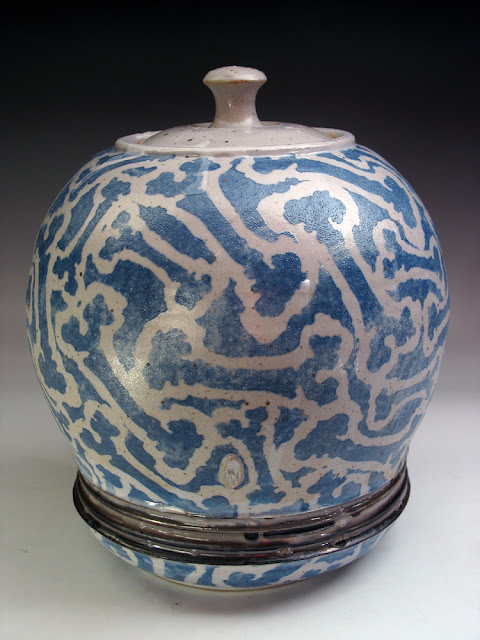 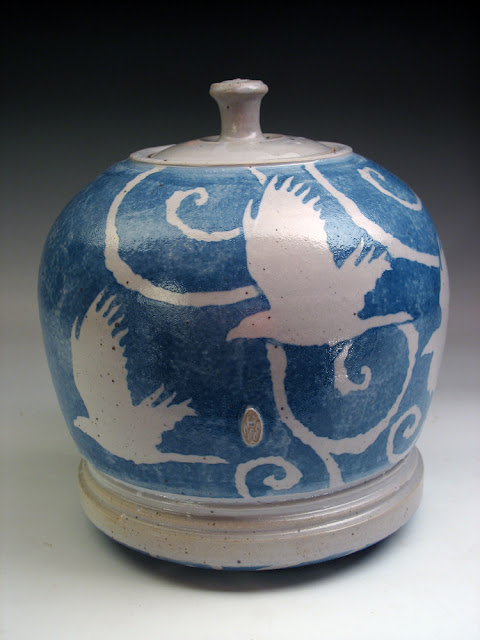 These are fired using a Freer glaze that's much, much better suited for salt... but it gives a nice subtle white surface in cone 10 reduction. 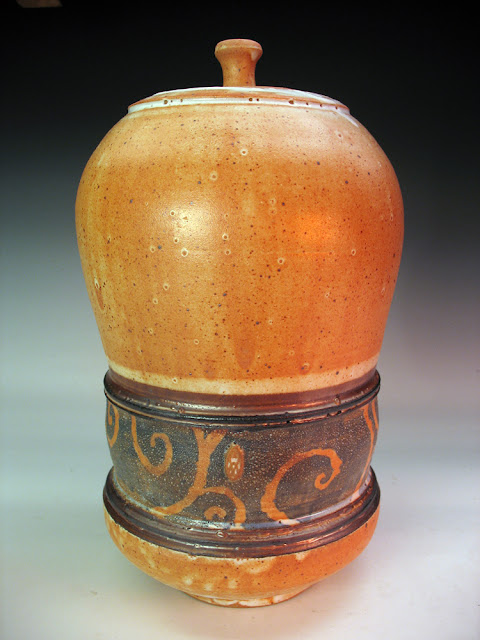 I probably would be wise to stop scewing around and stick to what works, but there's just so little fun in opening a kiln to predictable results.
I'm told I have issues.
Posted by FetishGhost at 7:51 PM 7 comments:

I measure my success by the friends I make along the way... 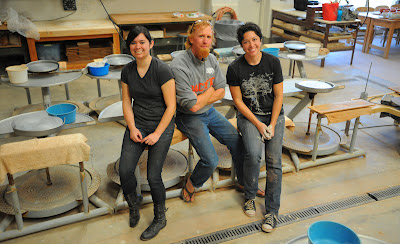 This is a glory shot taken a few weekends ago by local award winning photographer Arturo Vera while he was shooting stills for this years Souper Supper fundraiser for the TideWater Art Gallery.


From left to right... It's Jessica Fong, me, and Tara Heinzen Danielson.
It's great to get to work with a crew who's smiles are all genuine.
Thanks you two!
Posted by FetishGhost at 8:37 PM 8 comments:

I've been listening to the Dracula soundtrack by Philip Glass and the Kronos Quartet over and over this past week while working the gardens and campus. 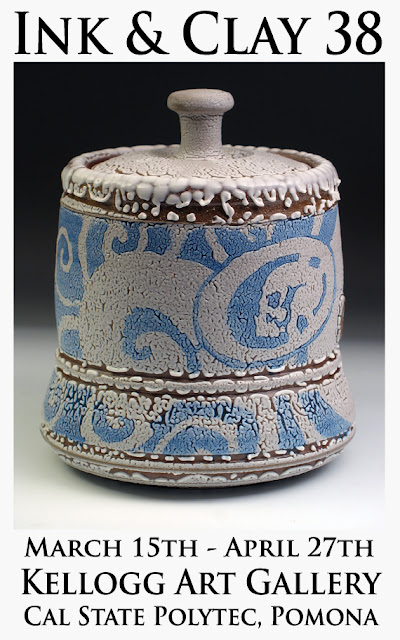 I love just getting an opportunity to show this stuff at venues that I've dreamed of getting to show at. 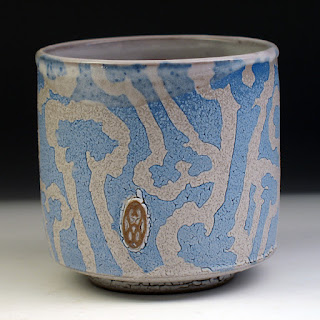 Work is heading off to Poly Tech! 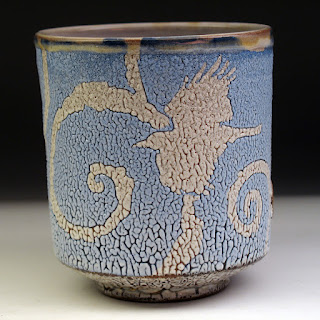 Cracked two kilns open this afternoon at the ceramics lab at UOP. One electric, testing scale-ups of the crawl glaze application. 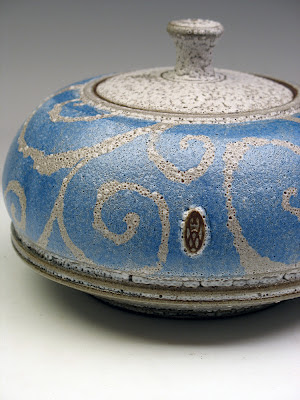 What works just fine on the small scale of cups becomes very problematic on pieces over 10 inches for me. 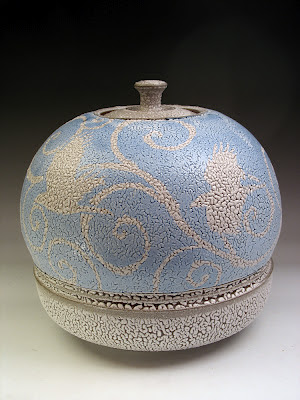 The more I've played with this glaze, the more I can enjoy the chaos of the results.
The same can be said with the results from the tests coming out of the gas kiln. These are pieces retesting a Helmer flashing wash. 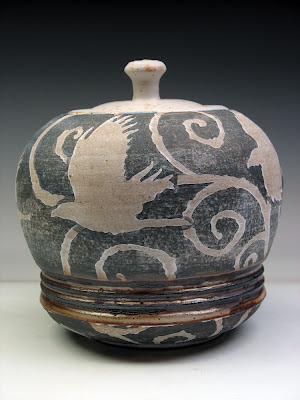 This wash is meant to be fired in a soda kiln, but I like the chalky effect when it's juxtaposed with a glossy matte. In the above case, it's a standard studio Shino over a Black Stain.
I like it. 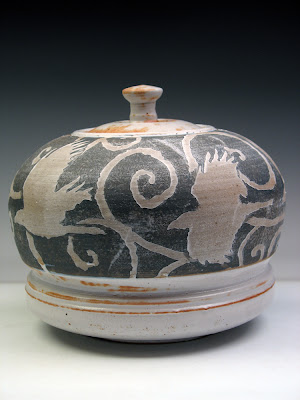 Things don't need to be predictable to be enjoyable. Different is much more interesting.
Posted by FetishGhost at 7:16 PM 4 comments:

These are notes from a few scraps that were found swirling around. Been looking for anything I could find regarding the glaze shown above.

If anyone has any more tidbits, I'd be really keen on adding it to the pile.

Advertisement
Expert: Ti Phillips - 10/19/2008
Question
I am looking for a "crater"type glaze similar to those used by Lucy Rie, the english potter. I dont think she shared her recieps widely. A matt, firly thick buttery glaze that forms craters due to the release of gasses close to its melting point. I fire cone 9. 1260.C. any Idea?  Thanks Chris.

Thank you for your recent question. Crater glazes are also known as volcanic or froth glazes. Although these are commonly described as defects, a glaze purposely created for this type of "defect" is no longer considered a defect to the glaze surface, but a decorative surface. Lucy Rie purposely created glazes to achieve this type of effect, but there are other potters who find the froth surface a unique and beautiful design, if done correctly.

The key to a froth or volcanic glaze is silicon carbide or barium sulphate. These two ingredients create a bubbling effect under the glaze. When fired, the kiln must be turned off and temperature brought down to a dull red at a specific time in order to achieve the effect. Although commonly performed on low fired ceramics, this process can be achieved on high fire, if you take the time to watch your kiln.

To create the volcanic reaction, create a slip using the same clay body your pot is made from. For every 100 grams of wet slip, add 10 grams of silicon carbide or barium sulphate. Sieve into a 300 mesh sieve. Mix and apply where you wish the froth to take place.

Use the recipe below and glaze your pot as normal. The recipe will create a buttery glaze matt at cone 9

Once the glaze has been applied and you are ready to fire, careful watching of the kiln near the maturing point is essential to achieve the froth. Viewing the glaze through the peephole will allow you to see when the kiln should be turned off. You will see an orange peel affect and even some popping of the glaze. This is when the temperature should be reduced.

Although this is my way of achieving the froth effect, please test this method on sample tiles prior to using it on your work. Let me know if I can be of further service to you. Good luck!

I never dreamed I'd ever actually get to see something like this!
Granted... you'll have to turn up the audio but it's still worth making time to watch and listen.

I've wanted to live in Carmel since the first time I visited the village by the sea... cozy streets, quaint bungalows, the lure of arts and the smell of good food.


Well I've arrived!
Although I won't be living in Carmel, but we will be living "on" Carmel... Avenue! 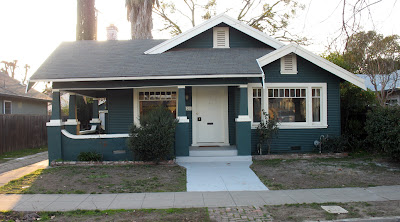 Good enough for me and the family!
There's even a Garagio in the back just waiting for me to fix up!
Time to start over... it'll be so much easier this time. 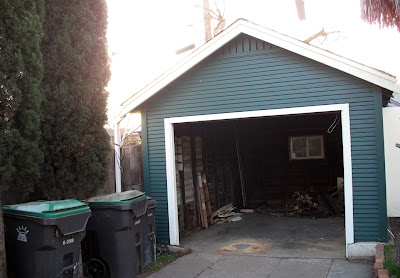