Here's a handful of test yunomi that I would really like to post. (It's a personal thing.) 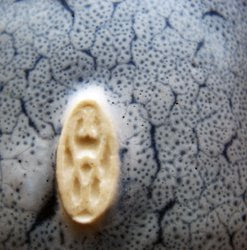 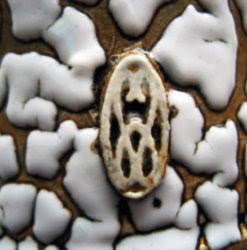 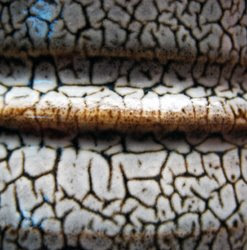 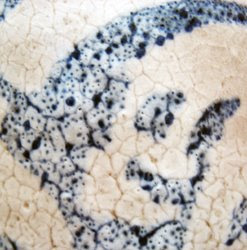 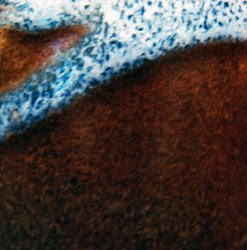 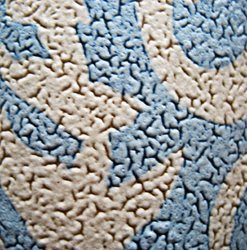 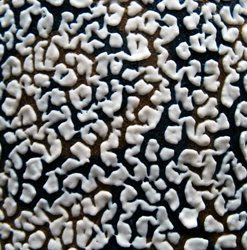 This is the crawling glaze over the studio's clear liner. This combination creates lots of texture! Very very Arty, but not really practical.
Posted by FetishGhost at 5:07 PM 3 comments: 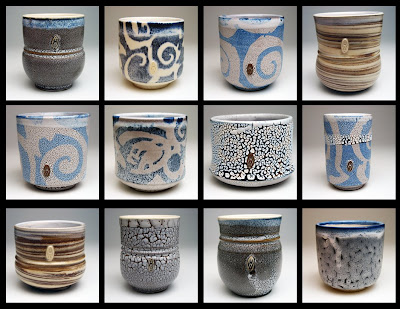 Before I share what came out of this kiln load I really need to say something... Most people don’t realize how much risk is involved with creating studio ceramics. It’s really all old school alchemy. I stead of lead to gold, it’s clay to sellable work. (It really doesn’t sound as cool, I know, but still, it still takes a huge amount of study, confedence, and work.) I really felt that this was my riskiest kiln load of work to go through the studio in a good while. I loved all of the forms, and the slip stenciled designs were fantastic. It would have been so easy to push everything though with my “I pretty much know what I’m going to get” glazes that I’ve been working with over the past 9 months. But… I have a new glaze that I’ve been playing with. 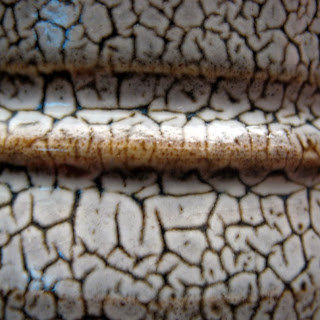 It's a generally untested glaze, but it’s proven to be an amazing glaze that breaks and crawls at cone 6. This load of work was designed to test this glaze’s interactions with most of my studio glazes. this is the point where I point out all of the beads of sweat, lots by the way, over this load of work. It's over 50 peices that will live or die when I open the kiln.

In a situation like this I quite honestly I would have been happy with a 50% loss ratio with this experiment. Hell, I’d have been happy with a 90% loss ratio. I had already seen what this glaze could produce and it would be worth loss just to get a handful of racers with it. I just didn’t know whether the racers I had made before were accidents of application and atmosphere, or whether my assumptions with this gaze were correct. Luckily I hit my marks with 6 out of 10 assumptions. There will be a few refires, but the bulk of this load is going up for sale. First come first serve, these really are amazing yunomi. A local venue has already laid claim to work that’s unsold by the 15th of March. 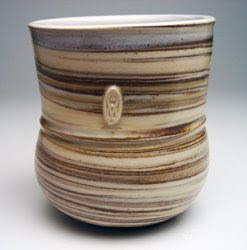 The first works I want to quickly note are the results of the Agate ware. These have been fired with a clear glaze. WoW! They really look great. The form’s true profile is pleasantly hidden by the marbling effect.
Love it! More in the next few day's... 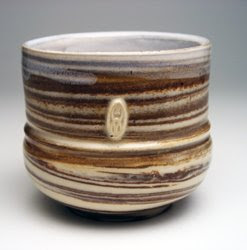 Posted by FetishGhost at 7:28 PM 3 comments: 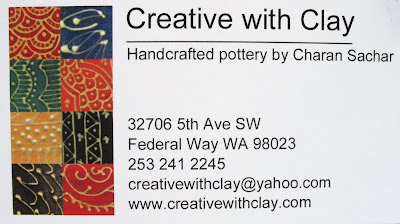 Yeah! I got my stamps today! They are beautiful... Thank you Charan!

His craftmanship is impeccable and his designs are top notch!

I've set them by my computer so I can look at them and plot how I'm going to begin making use of these little wonders. I can feel my world shifting with all of the possibilities! Just another hour or 2 until it's studio time. I can hardly wait... 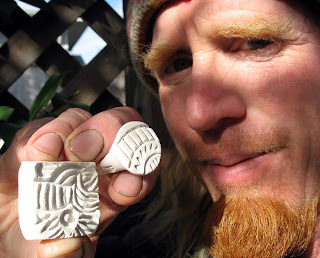 These are what I got in the mail. The results of a group stamp swap for the Etsy Mud Team. I sent out mine just the other day...
If you would like to see the photos of everyone's stamps, just give this a click.

After 5 days of Ibuprofen & Hydrocodone to help with a hurt back, I’ve got to celebrate this small victory by saying “Yes!” The 2 vases submitted for the “Expressions” show in Tracy, CA. sold last week! Happy dance! Doh! Ouch… 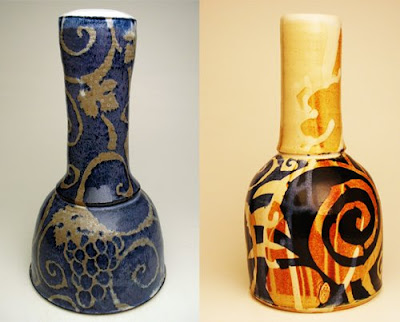 Posted by FetishGhost at 2:08 PM 4 comments: 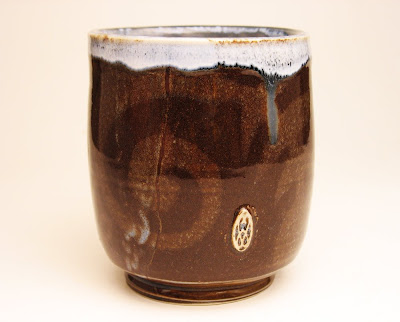 I’m starting the Secret Studio Sale project to highlight some of my personal favorite works from my studios inventories. I’m offering to share a few of these selected racers one at a time at a price temporally set to get them in your hands. These pieces really need to be handled to be appreciated. They are top quality examples of my pursuit of excellence and craftsmanship.

Click the photo for the link to my Etsy shop. Check back here over the next few weeks for a link to the current Secret Studio Sale item.

Your purchases goes towards helping fund my community activities that promote the Studio Arts in Northern California's central valley.

I love the Etsy Mud Team! This team has been one of my studios’ best sources for information, inspiration, and friendship. That’s a lot to get out of a group! 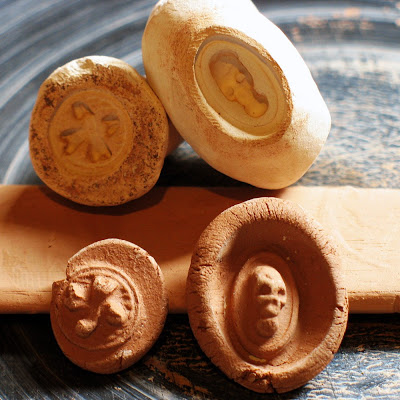 This is a quick posting showing what the studio is throwing on the pile for this season’s group exchange. They’ve decided to make and exchange bisque stamps this time; I love stamps, so naturally I wanted in on this project. I guess mine are should be considered sprigg moulds rather than stamps, but hey… I’ve always been difficult.
If you would like to see how I commonly use a sprigg mould in my work check out this past post. Click Here. 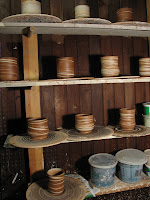 Ok… it’s been a long week. Fortunately/unfortunately most of it was all it was all unpaid volunteer work organizing and creating opportunities in our community for the ceramic arts community. Not easy, no glory, but if you cross your eyes and hope for the best, it is fun… I’m probably in way over my head, but hey, it’s sink or swim.
The few hours of studio work I squeezed in this week in between meetings and rain storms was spent getting work thrown to test a few pages of my new designs. I splurged today; I decided to finally get around to doing something I haven’t had time to do for years. 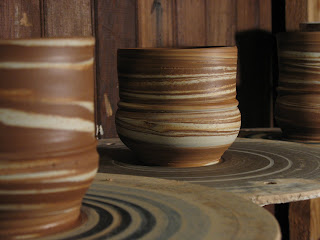 I started a series of agate ware yunomi. I’m working on developing a 20 works for a neighborhood sushi bar. These might be a nice addition to the proposed collection.
Posted by FetishGhost at 8:09 PM 3 comments: 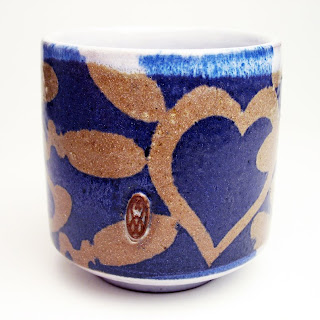 This series was done in all playfulness mixed with a dash of beaming Love… we live to create. 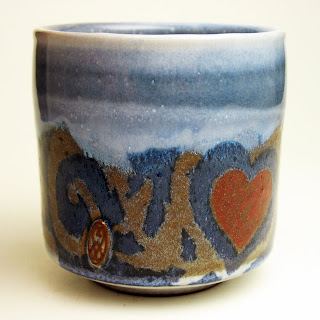 I’ve been waiting and wanting to do this series since right after last year’s Valentine’s Day. Up until a month ago, the idea was just a few doodled thumbnail sketches buried along with hundreds of other ideas hibernating in the pile of sketchbooks. It was just waiting until I could find enough time to get around to pulling everything together.
The series is a little internal conversation on the melancholy nature of love… the warmth of the heart seems so red next to the blue of dreams. 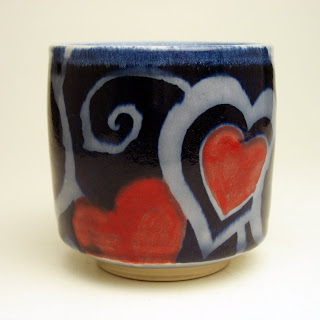 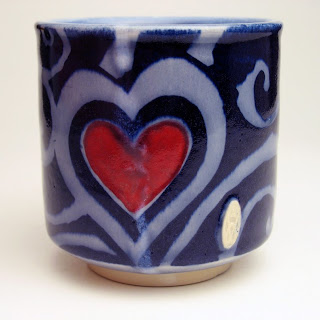 It is rather cryptic.
Posted by FetishGhost at 10:34 AM 4 comments: 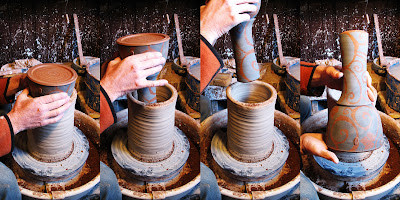 The spring shows are getting into gear here in Northern Cali. They are popping up like winter Hyacinths. I know technically its still winter somewhere else… but hey, the trees are budding to bloom in a week so it’s spring for me! I got a little thrown off my step two weeks ago with a surprise call to travel back home for a family funeral and missed the shipping dates for 3 major shows in one swoop. Doh! 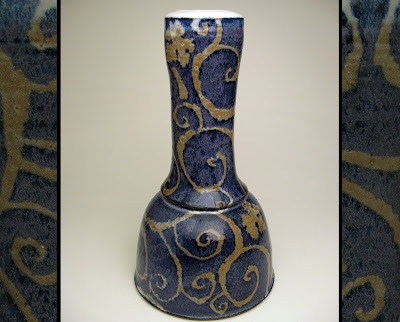 Ever onward… Still recovering from last night’s gala fundraiser for the TideWater Gallery, I drove down to Tracy to submit 2 budvases to the Tracey Art League Spring Annual. 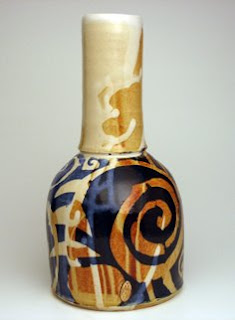 I’m not hoping to win any prizes, but I did price to sell. I’d be nice to cover the cost of the entry fee and gas to get there. Still, it’s fun to play in someone else’s sandbox.
Posted by FetishGhost at 5:50 AM No comments: