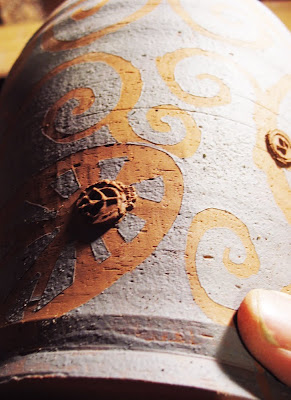 After a morning spent in the gardens, it was back to throwing lids, trimming the second half of yesterday's batch, and relaxing into the late afternoon with a stiff drink while I blocked in another go at a new "glowBugs" motif; (small g, big B, because they're cool like that... it's their backside that counts.) 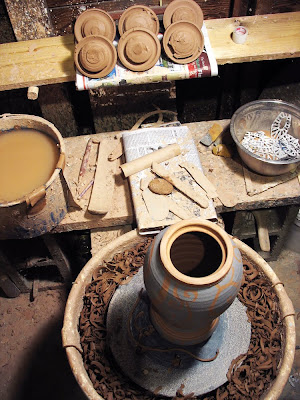 This has been a fun tangent brought on by the work of an artist 3000 miles away, Dan Finnegan. 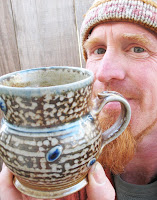 Out of the blue he handed me this mug this spring and I've played with it like a kid with a strange cool bug. Amazed fascination.

I'm drawn to the notion that we can use carved and bisque stamps to create sprigs that can be used to build a surface rhythm on a form. This is a subtle visual feature that really adds to the form, but it's really something for the hands to enjoy.
I made a bunch of carved sprigg stamps this spring and now they are making good use as glowbugs... 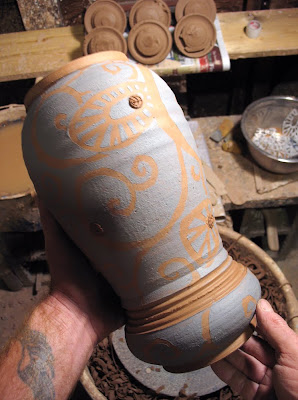 Yesterdays lot is now up-sidedown and drying... not a skull or bone in the lot and I'm starting to find that a bit disturbing.

Oh well, we'll take care of that tomorrow.
Posted by FetishGhost at 9:57 PM

yes, disturbing! I like the litle things fingers find on pots, especially cups.

you know i love bugs... i love the shot of the different pieces upside down drying. i've been throwing variations of that middle one for days and have ended up pouffing mine out a bit on the top half (when they're right side up)