This little gem of a liner glaze is an absolutely amazing find for and anyone that's banging their head against the trials and tribulations of getting a handle on dealing with Aardvark Clay's Cassius Basaltic Cone 5 Clay.
It's no small feat.
The learning curve on just dealing with the clay body was a nightmare, but once that was figured out(ish), finding a glaze that would play well with this clay was even worse. Aardvark was up front and honest when I asked them about glazes that would work. They flatly stated that the blistering and pitting problems are a plague with this body. They did have a few in-house glazes that they could recommend, but other than that, they were receptive to any findings.

All I can say up front is that it really works.
This glaze is different. It runs cone 4 to allegedly cone 14.

I'm going to let Aaron do the speaking on this one and have him give you the recipe.

"The liner glaze is a PB (Plastic Bitrox) Liner. This glaze works very well with this clay because the PB Liner is able to be fired with a range of cone 4 to cone 14. So if the cassius Basaltic clay still has gasses to be released, even after a longer bisque period, the PB Liner stays in a liquid / molten state for a longer time, giving the gasses from the clay time to escape without creating cratering in the glazing.
The PB Liner recipe with Percentage by Weight:
Colemanite (Gerstley Borate) 50%
Plastic Bitrox 50%
Zircopax 10%
To fill a 5 gallon bucket only 3 quarters full you would use
Colemanite (Gerstley Borate) 3000 grams
Plastic Bitrox 3000 grams
Zircopax 600 grams" 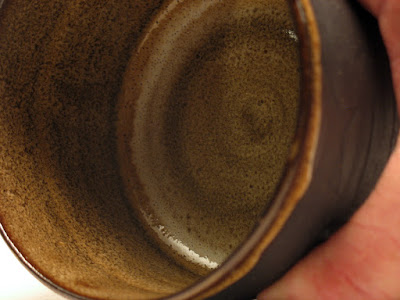 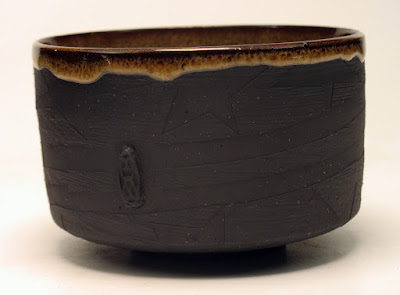 Admission.
I did substitute Gerstley Borate for the Colemanite as a matter of convenience.

Thank You Aaron.
I owe you a round.

Posted by FetishGhost at 6:46 PM

Not only fits well but is luscious to look at. It looks like its pleasant to the touch too.

thanks for sharing the recipe, looks wonderful with the cassius. I recently tested a few of my unglazed cassius basaltic pieces which were fired to cone 4 and they held water which I was pleasantly surprised of. been using some of Standards dark brown clay which fired almost black and will be testing some of Stone Mountain raven clay in January which fires black.

Thanks for the posting this. I mixed up the recipe and glazed a bunch of pots and was very pleased with the results! So stoked on this I'm going to work with this for a few months now and monitor the results.